The current migration situation in Europe: Germany, the EU, international law, and possible resolutions to the crisis

Bruce Leimsidor has served as counselor for asylum affairs in the Venice municipality’s program for asylum seekers; senior resettlement expert at the United Nations High Commissioner for Refugees’ central resource center for East Africa; Director of the U.S. State Department’s Overseas Processing Entity in Vienna; and was the Director of the Central European office of the Hebrew Immigrant Aid Society. He has taught at the American University, Paris; Oberlin College; and Indiana University.

Thanks to the American Council on Germany Charlotte Warburg Chapter and Davidson College’s Department of German Studies for making this possible. 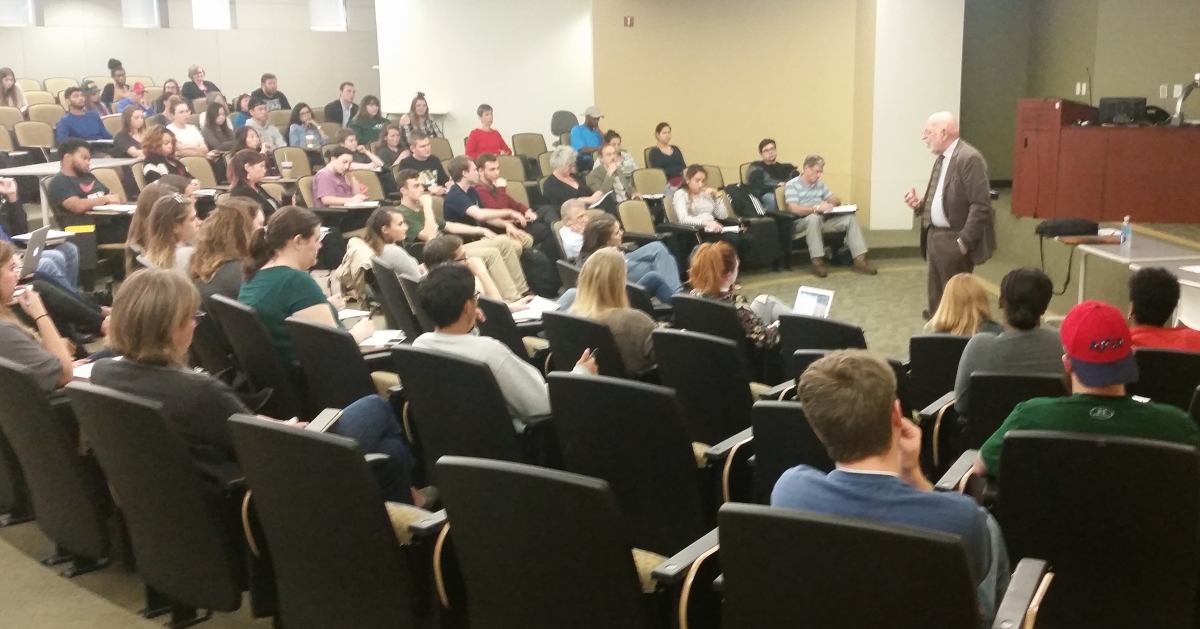 In Commemoration of the 78th Anniversary of Kristallnacht

The night of violence and terror that presaged the Holocaust

Susan Cernyak-Spatz, who is a Professor Emerita of German Literature at UNC Charlotte, was born in Vienna and in 1929 moved with her family to Berlin, where they witnessed Hitler’s rise to power. They fled to Prague in March 1938. Her father managed to escape to Belgium, but the Nazis arrested and eventually deported Cernyak-Spatz and her mother.

She was eventually deported to the death camp Auschwitz-Birkenau, where Cernyak-Spatz’s connections in the barracks and the fact that she could speak several languages helped her obtain a job in the camp’s administration offices, away from the deadly outside work details. She survived Auschwitz-Birkenau and the women’s concentration camp of Ravensbrück. Her mother died in the Theresienstadt ghetto.

Racism, police violence, protests: “How could this happen in Charlotte?”

Lecture and dialogue with Brenda Tindal

Dr. Brenda Tindal was named Staff Historian at the Levine Museum of the New South in September 2015. A Charlotte native and graduate of UNC Charlotte, Tindal's history with the museum first began in 2003, when she worked as an intern and research consultant, assisting with the award-winning exhibit “COURAGE: The Carolina Story that Changed America,” followed by the early development of the “Purses, Platforms, and Power: Women Changing Charlotte in the 1970s” exhibit.  Tindal received a B.A. in History and Africana Studies at UNC Charlotte in 2004, and following her work at Levine Museum, began pursuing a M.A. in American Studies at Emory University in 2005; in 2015, she earned her Ph.D. in History and Culture within the Graduate Institute of Liberal Arts at Emory University.

During her post-graduate work, Tindal built on her initial museum experiences through a number of significant and comprehensive research, archival and exhibit projects. These included the papers of Pulitzer Prize-winning writer-activists Alice Walker, the organizational records of the Southern Christian Leadership Conference (SCLC) —both at the Manuscript, Archives, and Rare Book Library (MARBL) at Emory—and the papers of Ambassador Andrew Young at the Auburn Avenue Research Library on African American Culture and History.

Since 2012, Tindal has lived in Charlotte and from 2012-2015 served as a lecturer in the Department of History and Honors College at UNC Charlotte), where she taught a broad range of courses related to 19th and 20th century U.S. and South African history, visual and material culture, and global social reform movements.

The Center for Holocaust, Genocide & Human Rights Studies and the Department of Global, International & Area Studies

No Public Space for Anti-Semitism: Remembering the Holocaust in 21st Century Berlin

Dr. Andrea Mehrländer is a native of the city of Berlin and has been working as Executive Director of the Academy of Transatlantic Academic Studies since 2014. Between 1999 and 2001 she served as Deputy Director of the Center for U.S. Studies at the Martin-Luther-Universität in Halle-Wittenberg. In 2001, she returned to Berlin to serve as Checkpoint Charlie Foundation’s Executive Director until 2013. Since 2008 Dr. Mehrländer has been administering the annual Berlin Summer Academy, which helps U.S. public secondary school teachers and university professors to gain insight into the social, cultural, and political factors that led to the Holocaust

Memorials to the Holocaust in today’s Berlin.  Hundreds of memorials of all sorts are scattered throughout the city.

Lecture and discussion: "Black Genocide: Protest Movements and Social Memories of Mass Murder in the United States and West Germany of the 1960s and 1970s"

Co-sponsored by the Departments of Africana Studies and History 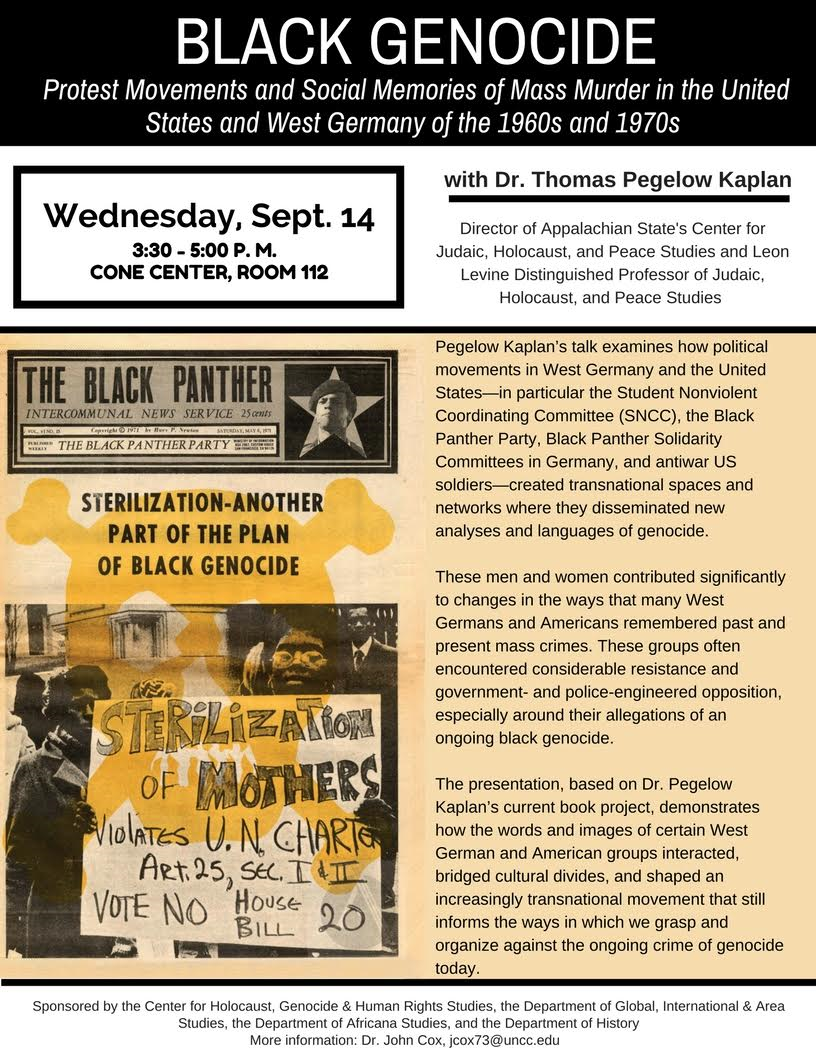 Andrew Nagorski is an award-winning journalist and author who spent more than 30 years as a foreign correspondent and editor for Newsweek. He won acclaim for his 2013 Hitlerland: American Eyewitnesses to the Nazi Rise to Power and his 2007 book on Stalingrad, The Greatest Battle. 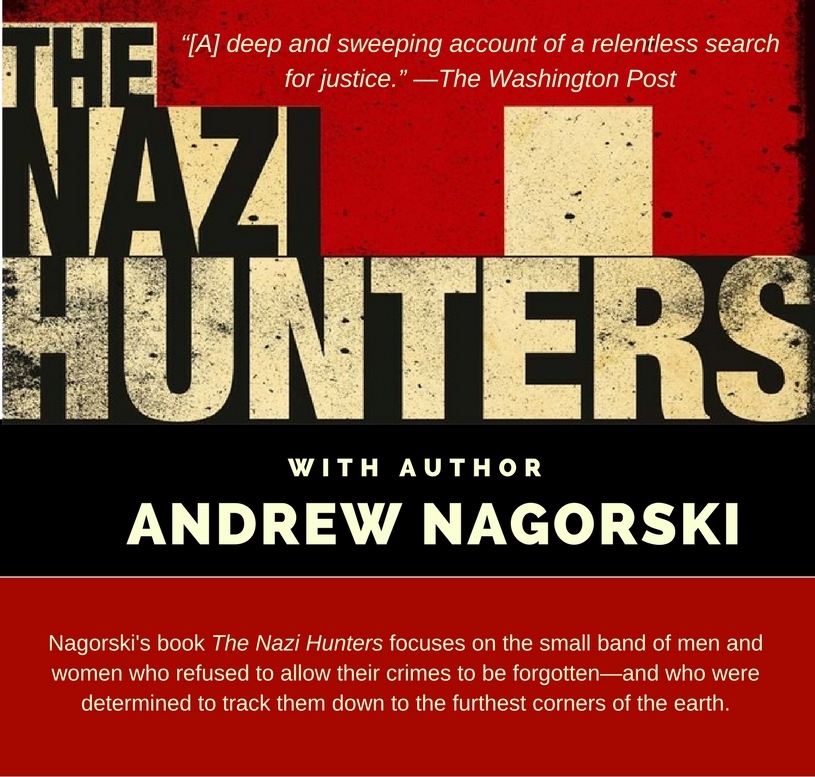 Sponsored by the Center for Holocaust, Genocide & Human Rights Studies and the Department of Global, International & Area Studies,
as well as the Departments of History, Languages and Culture Studies, Political Science and Public Administration,
and the Office of International Programs. More information: John Cox, jcox73@uncc.edu

Commemoration of the 21st anniversary of the Genocide in Srebrenica, Bosnia

A special event to mark the 21st anniversary of the Srebrenica genocide (July 11-13, 1995), when Serbian forces captured the eastern Bosnian town and summarily executed 8,372 Bosniak civilians. The event will feature brief documentary footage and talks by survivors.

UNC Charlotte campus; Cone parking lot is recommended, and is free for this event 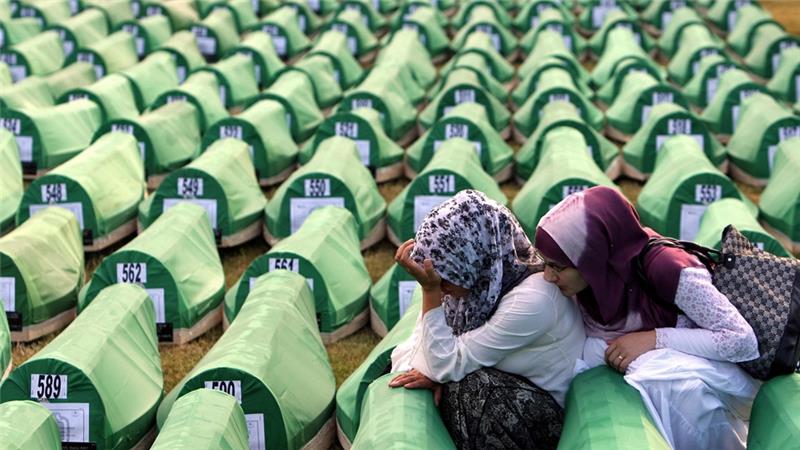 And everyone is invited to a second commemorative event, held at the Shahid Mosque on Monday, July 11 from 8:30 – 9:30 pm. The mosque is located at 6200 Wilora Lake Rd., Charlotte.

Sponsored by the Congress of North American Bosniaks (North Carolina) and by UNC Charlotte’s College of Liberal Arts and Sciences’s Department of Global, International & Area Studies and its Center for Holocaust, Genocide & Human Rights Studies; the Department of History; and the Office of International Programs (OIP) 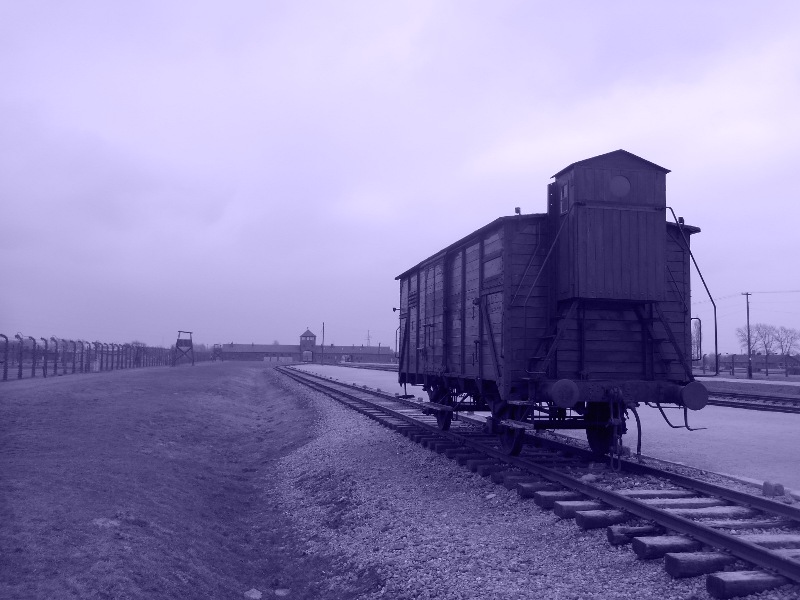 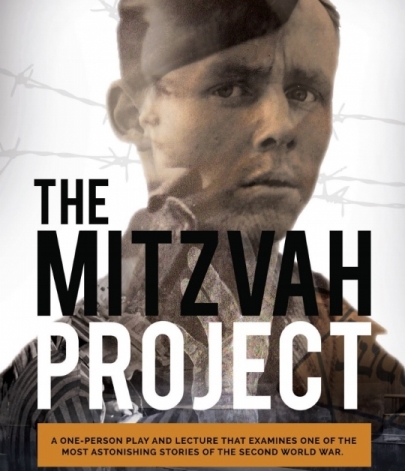 The Mitzvah Project is a combination theater, history lesson and conversation in which actor and child of survivor, Roger Grunwald, explores one of the most shocking aspects of the Jewish experience during the Second World War. Through the story of Christoph Rosenberg, a German half-Jew, the one-person drama — created with director and co-author Annie McGreevey — reveals the surprising history of tens of thousands of German men known as "mischlings" — the derogatory term the Nazis used to characterize those descended from one or two Jewish grandparents — who served in Hitler's army. Grunwald's lecture delves deeper into the history that produced these mischling-soldiers — men who were the product of two centuries of German-Jewish assimilation, intermarriage, conversion and the striving of a people committed to calling the German Fatherland their home. After the lecture, Grunwald leads a discussion with the audience.

A special event to commemorate the Rwandan genocide: Brief video & a dialogue with survivor Mugabo Yves

April 6-7 marks the 22nd anniversary of the beginning of the Rwandan genocide. In the span of a mere 100 days, some 800,000 Rwandans were methodically hunted down and murdered by Hutu-power extremists—a horrifying reminder that such massive crimes against humanity are still possible, decades after the Holocaust.

Mugabo Yves speaks about these mass murders in Rwanda from the perspective of a child survivor. In April 1994, he was seven years old. His Tutsi family lived in the capital Kigali that became one of the key sites of the killings. His mother and many close relatives perished. Yves survived with the help of Hutus. 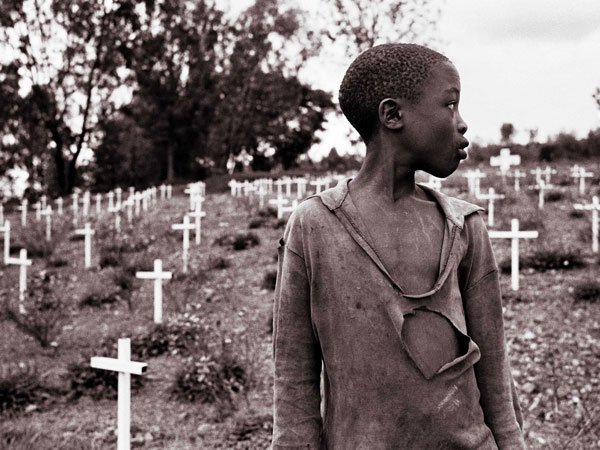 Sponsored by UNC Charlotte’s College of Liberal Arts + Sciences and its Department of Global, International & Area Studies (GIAS) and the GIAS’s Center for Holocaust, Genocide & Human Rights Studies; the Departments of Africana Studies, History, Philosophy, and Political Science and Public Administration; and the university’s Office of International Programs

A 42-minute video of the February 2016 presentation by Dr. Adam Jones on "genocide and religion":

Among the books written or edited by Dr. Jones: 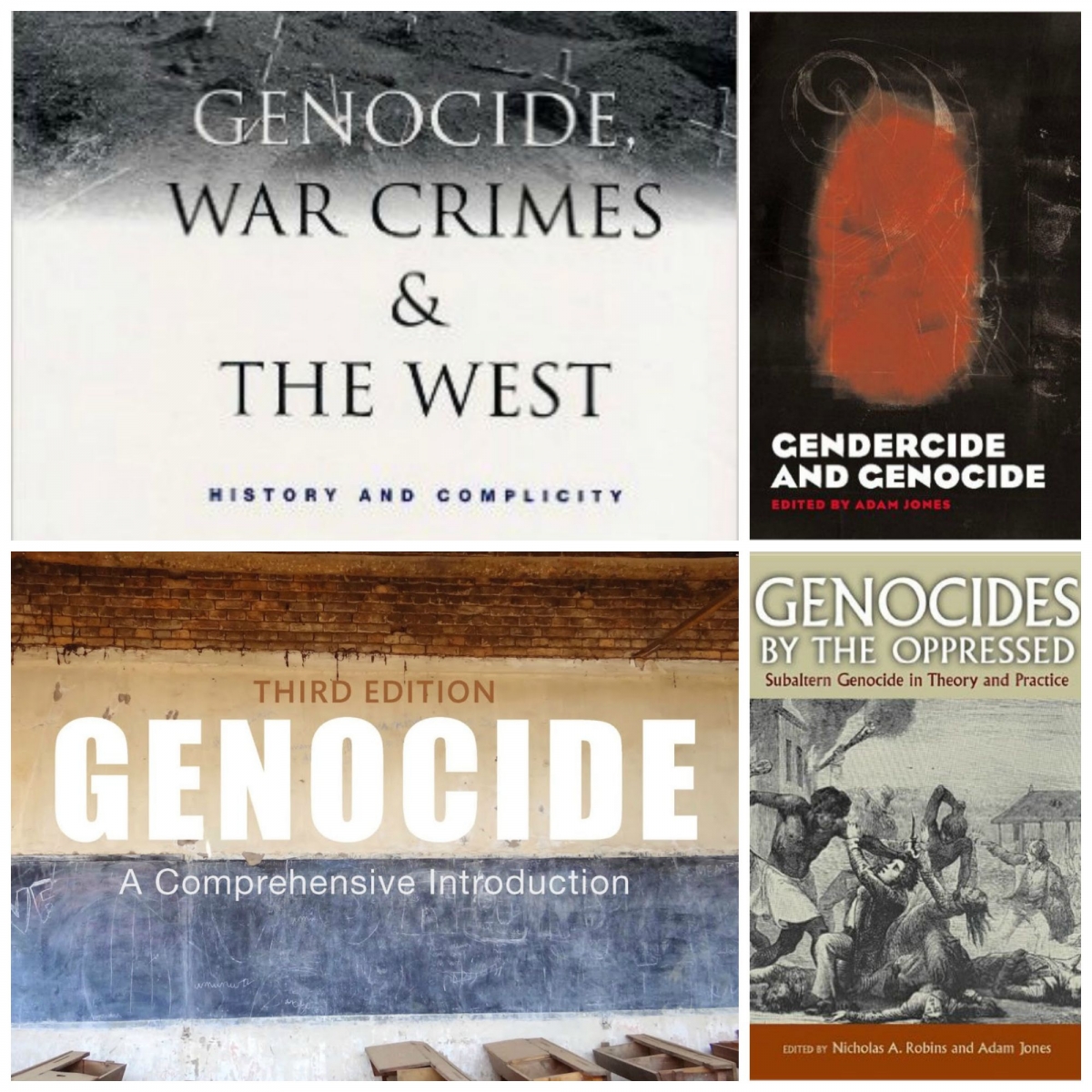 Lecture by Frank Lord, "The Recovery of Nazi-Looted Art" 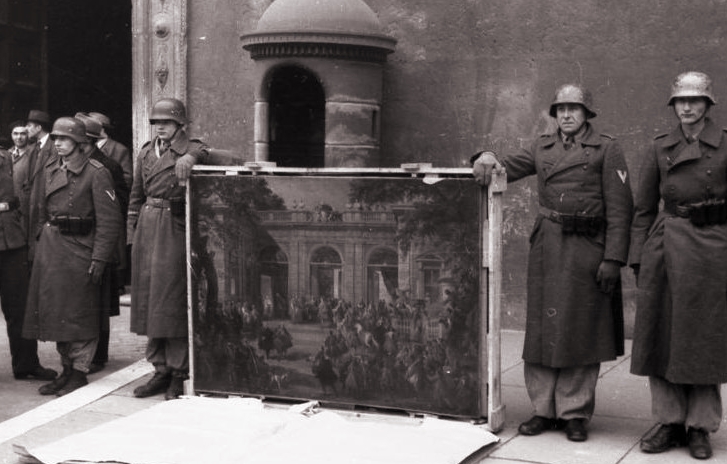 Lord is an attorney with Herrick & Feinstein LLP, based in New York, and has worked on legal issues related to recovery of Nazi-looted artworks. He has also written numerous articles on these issues: http://www.herrick.com/sitecontent.cfm?pageid=15&itemid=10845&type=4