Our Center only exists because of Dr. Cernyak-Spatz's work and her vision & inspiration over the course of her many years at UNCC. She taught here from 1972-1992 and continued teaching part-time, and organizing Holocaust displays and public lectures, well into her 80s. She left us in November 2019. 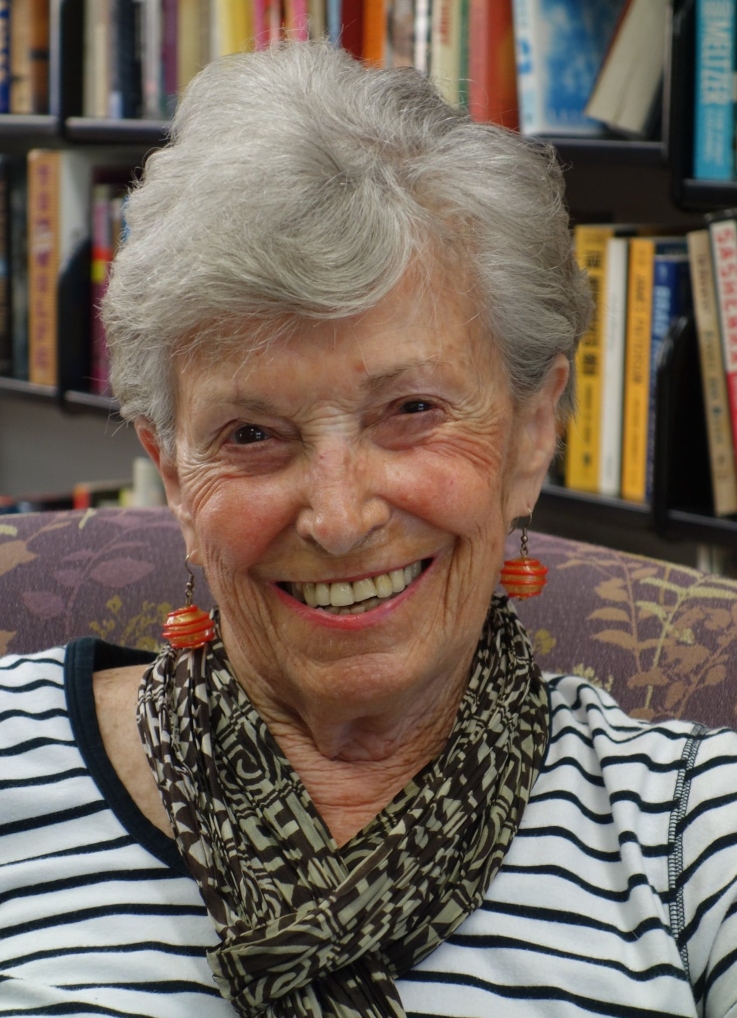 Written by Jackie Fishman, Nov. 18:  With great sadness, my family and I announce the passing of a remarkable woman. Our mother died on Sunday morning after a rich and meaningful life.

Born in Vienna, Austria, daughter of Simon and Friedl Eckstein, Dr. Spatz spent her childhood enjoying theater, opera and dance, as well as the study of history and languages. The German Third Reich and the eventual outbreak of WWII interrupted her life, sending her first to the Theresienstadt ghetto and eventually to the Auschwitz-Birkenau death camp. She survived not only the camps, but also the horrific death marches back to Germany as the war was ending. After liberation by the Allies and eventually reuniting with her father, she married Bernard Fishman, an American serviceman, arriving in the United States in 1946.

She later earned her Ph.D. from the University of Kansas and in 1972 began teaching German language and literature at UNC Charlotte until her retirement in 1992. She was instrumental in the creation of the Holocaust Studies programs at UNC Charlotte and continued to write and lecture locally, nationally, and internationally on the subject as recently as 2018.

Dr. Spatz was also an accomplished actress who performed in many amateur productions throughout her life. Her memoir, Protective Custody: Prisoner 34042, was published in 2005; it has been the basis of a documentary film and the inspiration for a theatrical production.

John Cox, Director of our Center for HGHR Studies:

Susan Cernyak-Spatz was not only a Holocaust survivor: She was a pioneering scholar, a tireless educator, and a fighter.

As a scholar, Dr. Cernyak-Spatz was a pioneer of Holocaust Studies, a field that barely existed when she earned her Ph.D. in 1971. Her advisor for her dissertation was  prominent author and German literature scholar Ruth Klüger, also a survivor, and during her subsequent career Dr. Cernyak-Spatz collaborated with Dagmar Ostermann and other scholars who introduced women's & gender analysis into the study of the Holocaust.

As an educator, in addition to her research and 20 years of teaching at UNCC (and creating Holocaust Studies here), she continued to speak at universities, high schools, community centers, and elsewhere until her last months. Susan explained her impulse in the Introduction to a book she published with Dagmar Ostermann and Bernhard Frankfurter in 1989: "To quote Primo Levi, 'If we forget the Holocaust, it can happen again, and next time it does not have to be the Jews'."

And she was a fighter and a feminist throughout her life.  There's no shortage of examples, but I'll refer to a passage from her her memoir that, having become acquainted with Susan only in her later years, I can easily imagine. She describes the moment of liberation, the day after Hitler's suicide. (And in recent years, when people asked her if she wanted "revenge," she would say "for what? everyone who wanted to kill me is now dead, and I'm alive.") Back to the story from 1945:

She and others, who'd survived a 'death march' and were being led through the countryside by three German soldiers, come upon an American unit. Speaking English (as well as Czech, French, and German), Susan walked up to the Americans, said "tell these Germans that the war is over," time to let us go, etc., and an American said "tell them to give you their submachine guns... “I think that was the proudest moment of my life, as I stepped up to the old man [the German officer] and said: ‘Hauptscharführer, the American officer wants your gun.’ I had no idea whether the American was as an officer or an enlisted man, I simply made him into an officer. Reluctantly, all three [German soldiers] gave me their guns and I carried them the few steps to the vehicle.”

November 2019 production of play based on her memoir

News articles about her, links to interviews, and other resources

Charlotte Observer, October 23, 2019: "Experience the story of a Charlotte woman who survived Holocaust death camps as a teen"

Her memoir, published in 2005, which is among the more compelling, harrowingly honest, and illuminating such books. Contact our Center or the Stan Greenspon Center if you would like a copy and cannot find one.

Five-page autobiographical document that Dr. Cernyak-Spatz and her family produced a few years ago for a Holocaust "Teacher's Guide" from the NC Council on the Holocaust

This is an extremely interesting video of a public talk from 2016. In the final seven or eight minutes she offers strong insights into recent trends in the world and our responsbility to maintain our humanity and our moral courage. The portion of this video that features Susan begins at the 8:08 mark.

Last year, Appalachian State's Holocaust-studies center produced this excellent 40-minute compilation from talks Susan has given there over the years. Thanks to Dr. Thomas Pegelow-Kaplan and our other friends there.

These photos are from a talk Susan gave at UNCC on November 9, 2016, attended by 350 people. Close-up of Susan Czernak Spatz courtesy of CDK Global.

The Center for Judaic, Holocaust, and Peace Studies at Appalachian State produced this powerful statement, which reads in part:

"Cernyak-Spatz, one of the very last adult survivors of Auschwitz in the state, was a forceful advocate against the rise of anti-Semitism and white supremacy in North America and beyond. She never tired of trying to help her many audiences understand how the Austrian and German Nazis were able to build a dictatorship and carry out genocidal killings of Europe’s Jewish populations.

Cernyak-Spatz always spoke her mind and did not shy away from any controversial stance, denying, for example, that there was a God in Auschwitz or comparing the beginnings of the Trump Presidency with the final years of Austria prior to the Anschluss to Nazi Germany. Her passing is a very painful reminder that more and more of the remaining survivors will leave us in the nearer future with far-reaching consequences for Holocaust education, which Cernyak-Spatz championed and engaged in so well for decades."

Her 2005 memoir, avialable on Amazon and elsewhere